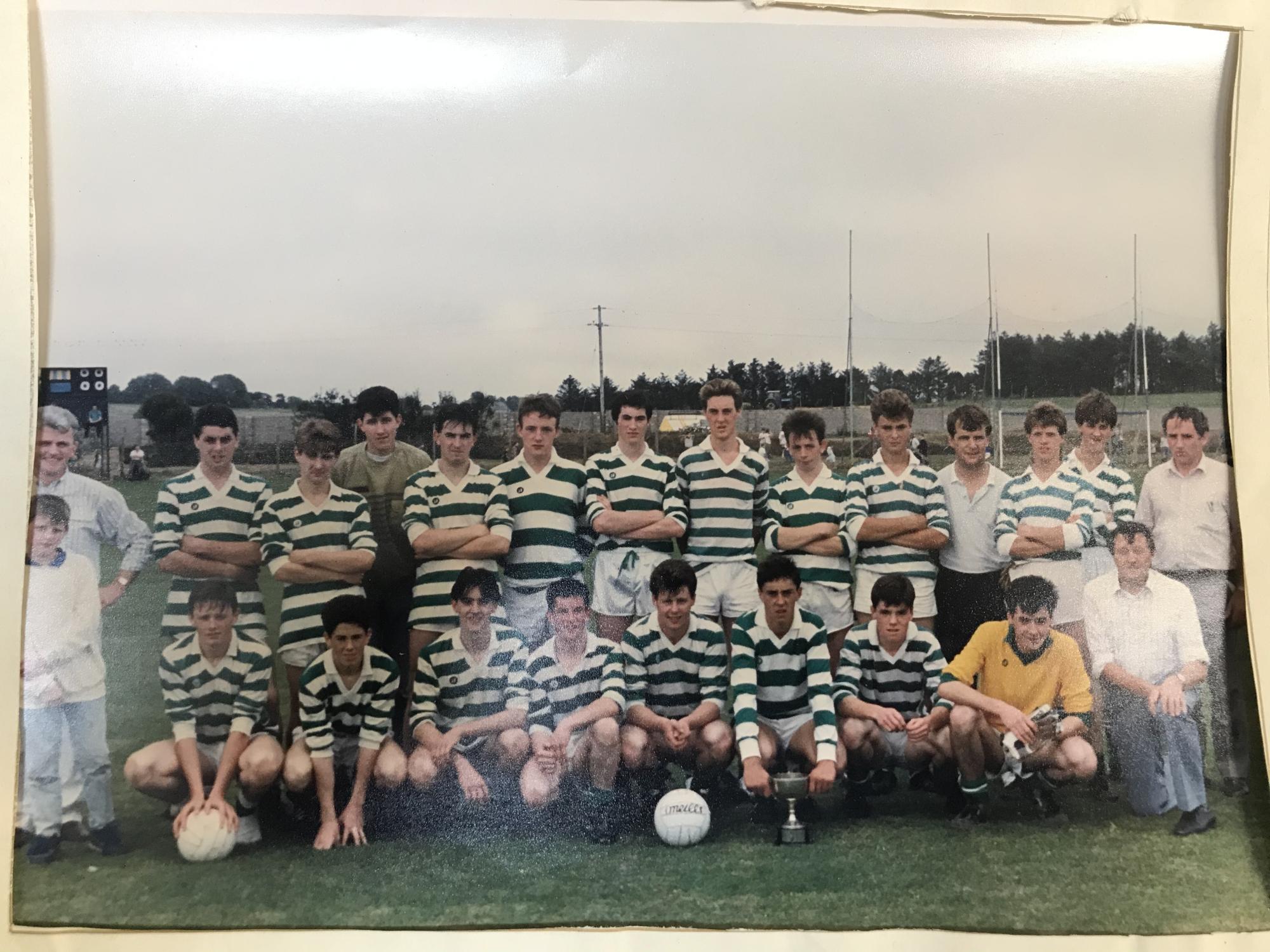 How many years have you been a member of Valley Rovers GAA Club?

I have been following Valleys since I moved to the parish in 1972. I actually came to the parish the same month as Fr. Murphy. What an impact he made to our under-age boy’s structure in hurling and football.

You have been hugely involved in Valley Rovers GAA Club all your life, what positions have you held in the club over the years?

When Fr. Murphy was leaving, he invited about 12 of us to a meeting (something like the Lord choosing the 12 Apostles). He put it up to us to organise and run the underage club. Which we did but he also put pressure on us by letting us know that Valleys won some competition each year while he was here. He also noted that he succeeded in involving the full parish. Surprisingly we came up with quite a good structure, those 12 combined with 8 others that had already worked with Fr. Murphy. We did succeed in most areas, with numerous achievements winning numerous trophies from U12 to U16. At our stage it was all South East (Carrigdhoun) division where in Hurling Carrigaline, Ballinhassig & Valleys were strong and in Football Carrigaline, Kinsale & Valleys were dominant. I have always believed a good underage structure was and is necessary for the success of the club.

What occupation have you had in your working life? Did this occupation integrate well with your involvement with the club?

I worked as an agricultural advisor and this helped me in club matters as you have to be a good listener and try to be a good communicator.

What is your favourite Valley Rovers hurling moment ever?
Obviously winning the county intermediate hurling VS Kilbrittain in 1989was immense bringing us to senior status for the first time but winning the Intermediate Hurling final VS Kilworth, giving us Premier Intermediate Hurling status, where we have remained ever since is the one for me. I hope we can stay up there. It is a great grade but hard to stay there. You must prepare very well to hold that status.

What is your favourite Valley Rovers football moment ever?

Interesting John Burke, Tadgh Burke, Ciaran O’Riordan & Jeremy Hurley were members of these successful teams, but they never won at underage on their year. So winning at underage is not that important so long as you develop the skills.

Have you always lived in the parish of Knockavilla/Innishannon or did you move here? If you moved here where did you come from?

I am from Newcestown, unfortunately there was no underage club there in my time. Our own Sean Collins came and organised a great club there. I never played underage but we won a Junior South West hurling championship in 1967. What a great servant Sean Collins has been to the GAA. After this my work took me to Co. Clare for 4 very enjoyable years where I got involved with Bodyke Hurling club. I coached the hurlers to Intermediate county victory in 1970, it was here I learned a lot about management, being thrown in at the deep end. I then came to Innishannon in 1972. I have lived in Skevanish since then.

If you could change the result of one game in the history of Valley Rovers, what game would it be?

It would have to be our senior hurling matches VS Blackrock in July 1992. Drew the first day but lost the replay. This was the highest we got in hurling. (Attached below is an article from the drawn game).

Who do you think is the best footballer Valley Rovers has ever produced?
Too many to pick one!

Who do you think is the best hurler Valley Rovers has ever produced?

Again too many to pick one.

What is your earliest memory of Valley Rovers?
My first introduction to Valleys is also one of the funniest, I attended a junior football game between Ballinhassig and Valleys in Dunderrow, where an argument broke out over a line ball. After a melee an “Unnamed” Valley Rovers support was seen leaving the melee being chased by the referee and a woman (believed to be the referee’s wife). Again, it is only hearsay but it is believed he had called the referee a few impolite names!!!!

The size of Valleys now.

In my time the development of the Bleach & Dressing rooms which was great. Better than most clubs. Any of the 2 previous clubs I was involved with had no permanent home to call their own. That combined with the use of the Hall and Tennis Court was great for the club.

Brinny, the procurement and development of our magnificent grounds at Brinny. Many people deserve credit for this, one I would like to mention is Sean Ward. There are so many involved in maintaining this great facility, but one man deserves special credit, Con Murphy, Brinny, what work he has done over the years for the club in Brinny. A quiet and very able unassuming gentleman.

A good structure at underage for the whole county with Rebel Og, this is now a huge help, with venues and Refs organised for games. In my time Refs for games was a nightmare. I thank Tom Cowhig for procuring Twinny O’Sullivan for most of my travels, what a brave boy he was even at 17 years old.

The great people that became involved with our club at under age. Dermot O’Brien, Jim Nolan, Pat Coleman, Donal McCarthy, Paudie Palmer. Also, the many women that took part in the running of our club such as Anna Cronin, Veronica Kelleher, Mary Newman, Mary Buglar and many more in my time. Neil O’Donovan was a great link to the Adult club and John Newman our “Press Officer” has filled many scrap books with his many articles of Valley Rovers games and activities.

What is your funniest/strangest moment ever with Valley Rovers?

Same as my first memory with the club.

What is your favourite sporting moment of all time in any sport?

The 1966 All Ireland, a very young Cork team overcame Kilkenny. We were starved for All Ireland at the time. We are now again.

Have you any advice for the young players of Valley Rovers today?
We have wonderful facilities and continued organisation. Make good use of them.
Play Camogie, Hurling & Football, they are great field games for your development.
Spend much more time practising the many skills properly. This is worthwhile whether you are naturally good at sport or not.
Learn to be a manly person and don’t get involved in the blame game. How often do we hear of pressure on selectors and referees? They will always make mistakes just concentrate on which mistakes you made and remedy them. 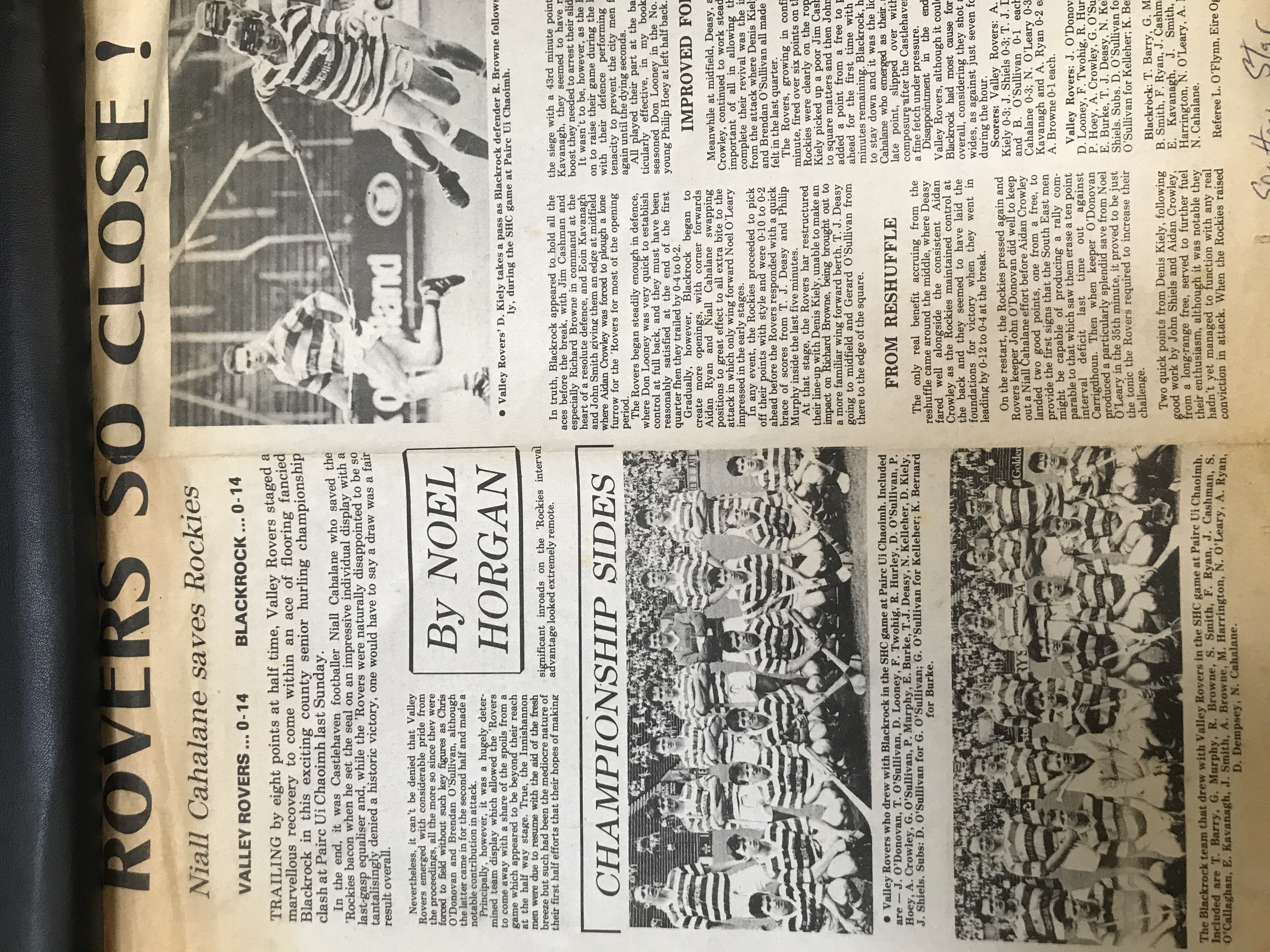