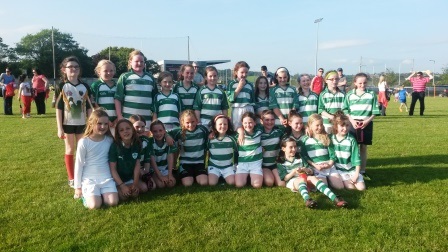 Congratulations to our minor girls on a fantastic win over Bandon in the West Cork Final on a score of 3-7 to 12 points. A great game of football was played by all.It was a close game all the way but  our girls kept their heads to hold the lead to the final whistle. A great match and the perfect end to end 2014. Thanks girls

U10 Match Vs Clonakilty

Valley Rovers u10 ladies played their 3rd match of the year last Monday night when they travelled to sun kissed Clonakilty to take on the local girls. Due to the large number of players we split the teams and everyone got a full game each. Great skill was shown by all and there was yet again another improvement shown from the previous games. Girls who performed admirally on the night included:

Valley Rovers u8, u9 and u10 ladies began their first matches of the year this week when they took on Kinsale in challenges games which were played down in the Bleech on Wednesday last. Many were playing their first game in the green and white of Valley Rovers, but if these performances were anything to go by, the future of the club is in very good hands. Each team came away with a victory, and in doing so displayed a huge amount of skill and commitment in doing so. Players from each squad included:

Played on Sunday morning March 23rd in Ballinspittle,the Valleys girls started well scoring a goal against the run of play by Eimear Whelehan, which was very well worked up the pitch with Roisin O'Donovan linking with Danielle Murphy and onto Jennifer O'Donovan before Eimear struck to the back of the net. This seemed to wake Courceys and almost immediately they went down the pitch and equalised. Playing against the wind and up the slight hill Valleys were under pressure for most of the first half and only for solid defending by Eva Murphy, Carol Cremin and Davena Sheehan, Valleys could have been further behind at half time. Courceys scored a further goal and a point to lead 2-1 to 1-0, but just before the half time whistle a well worked goal which started with Isobel Lordan ended with Grainne Dart O Flynn hitting the back of the net in what was the score of the day.
After the restart Valleys put severe pressure on the Courceys goal but were unable to penetrate the Courceys defense. Eventually, Danielle Murphy pointed to draw the sides level for the first time. With good play from Roisin O'Sullivan, Nicola Callanan, Kate O'Halloran, ellen Fennelly and Olivia Hayes we were unable to breach their defense again apart from a pointed free from Danielle Murphy. Courceys went on to score 2 more late goals and a point to win the encounter 4-2 to 2-2. This was a great display for the girls first outing of the year.
Team: Nadia Satini, Emma Murphy, Eva Murphy, Davena Sheehan, Carol Cremin, Roisin O'Donovan, Adi O'Sullivan, Grainne Dart O Flynn, Isobel Lordan, Kate Murphy, Danielle Murphy, Aoife O'Brien, Roisin O'Sullivan, Jennifer O'Donovan, Eimear Whelehan: Subs: Kate O'Halloran, Clodagh O'Donovan, Sarah Lynch, Ellen Fennelly, Olivia Hayes, Nicola Callanan, Niamh Hurley.